Nicely done article on the coming collapse of the Gold Pool

To better understand where Gold is going, you have to know where it has been (gold price suppression history).

Especially in the context of our last 50+ full fiat currency regime years as only for a small single-digit percentage in that time was gold allowed to do its freaking premiere money job.

Given the ridiculous situation, central banks and fiat financialization has gotten us to in 2020, it’s only a brief time from now where the ultimate final bubble of this debt supercycle shows up in gold.

Here we dig through in detail how the City of London has often been at the center of rigging gold prices for the benefit of fiat financiers.

Such frauds and those who learned volatility injection from them (COMEX) are losing effect as the run on gold bullion have begun.

Last time London was at the center of politely rigging the gold price, France’s Charles de Gaulle decided to break up the price rigging party with his Exorbitant Privilege (1965) speech.

The then French President spoke, in a similar tone to how a modern Vladimir Putin or a perhaps a Chinese Nationalist might today.

As you can see in that 1970-1980s gold price chart above, the yellow precious metal went to work repricing some 24Xs higher following the conspiratorial price rigging collapse.

In the video embedded above, look at the short excerpted (24th-minute clip in a 30-minute newscast) gold price news coverage delivered on Jan 3rd, 1980 in Indianapolis.

As the gold price was nearing full account of the fiat Federal Reserve note debasement at the time, you’ll notice that the world had not ended, the financial system was still operating, and while there were real doubts at the time, the fiat petrodollar won over the monetary system again, holding it dominance up to now, another four decades of time later (that may be following apart soon enough though).

All the official gold reserves allegedly held by the USA in the early 1980s got revalued so high around that time, we could have theoretically gone back on a gold standard had we so chosen.

Shortly we will cover a bit on the new forces who have already geared up as today’s more sophisticated and longer-lasting gold price containment scheme falls apart.

For this two and a half time longer 21st Century version, this is roughly where we are in a rhyming comparison today.

I will explain more on that point, shortly.

Hello, this is James Anderson of SD Bullion.

And we are about to go deep, to better understand why the LBMA and CMEGroup are panicking with new arbitrary rule changes and press releases via Bloomberg and Reuters, trying to calm people’s further desire for physical bullion in hand over derivative proxies.

Before we dig further into some 21st Century gold conspiracy facts and figures, lets look at some of this week’s unprecedented and rather depressing data. Much of which is attributable to the private Federal Reserve and their dual mandate failure in motion.

Fiat Fed Note Issuers Go Brrr (we warned you they would)

We are now on pace to see a doubling of the Federal Reserve’s balance sheet by the 4th of July 2020.

You heard that right, at this pace, in just over three months from now the Federal Reserve could have more than a $10 trillion valued balance sheet mostly bought with fiat digits punched up on a keyboard.

These are but a few of the many Monetary and Fiscal policies, which will partially contribute to the Federal Reserve’s balance sheet more than doubling sooner rather than later.

Oh, and one final note on that FRED chart above.

Last time the private Federal Reserve tripled its balance sheet was following a massive and similar deleveraging event in late 2008.

Here is how the 4 major precious metals responded.

Unemployment filings got about 100% worse than last week.

10 million American workers are officially out of work over the past two weeks of time.

To put that number into context, that is basically a little bit more than the entire working state of Florida.

The silver mining industry has more than half of its output currently shutdown, as this past week both the largest silver producing nations of Mexico and Peru have effectively closed down their major mining sites.

This news and realities like this, from shut down mines, refiners, and mints, it all just further energizes heavy silver demand and thus waining silver bullion shortage constraints and spot vs bullion price divergences further.

This week both the LBMA & CME Group have been on a Public Relations red alert.

Never have we seen such a dramatic shift between the undeliverable eligible pile, to the now deliverable registered pile.

One is left to wonder if we are about to see a record breaking stand for delivery session, on this limited gold that backs that highly leveraged, derivative exchange.

For perspective on physical gold, this entire pile represents but 1 of 590 physical gold ounces above ground.

The LBMA was out again this week smelling of desperation as they effectively used Reuters as their press release platform.

Essentially the LBMA cited that they oversee at the moment a bit more gold bullion than the unaudited US’ Official Gold Reserve tonnage total.

What they failed to mention, and what Reuters would never bother to ask or report on, is that of the over 8,300 tonnes the LBMA claims to oversee, what amount is actually deliverable gold bullion float supply and not owned by sovereign nations or gold Exchange Trade Fund holdings.

It so happens, data wrangler Nick Laird from GoldChartsRUs.com, has the updated end of 2019 LBMA London Gold Holdings data.

Only about 1 for 200 tonnes of gold bullion in the word is floating in that supposed transparent system at the moment.

So while the CME Group’s COMEX and LBMA’s London gold trading hub may at the moment still have sway on their underperforming spot and over the counter prices for gold.

The physical gold bullion trading world has now moved further away from their bid ask influence and is again outperforming their derivative price discovery proxies as we witnessed in the fall of 2008.

Of course it remains to be seen how long this current dislocated gold price discovery system can continue without further dislocation.

Smart money already has and or is likely going for any physical they can manage to attain.

And now to finish this week’s market update, I want to tie up how we began this update, investigating the last western world driven bullion bull market which effectively kicked off in 1968 with the collapse of the London Gold Price Rigging Pool. A dozen or so years later, by early 1980, all 4 major precious metals nominal fiat currency price highs within weeks of one another.

A couple years ago, this chart literally took my breath away once I understood the implications the compounding price data trends were making.

Over the years I have shared this chart many times. Some people get it, most may not understand what it’s conveying, and a small number actually have attempted to explain it away citing eastern gold jewelry price hedging as the reason for the divergence. I’ll tackle that point in a minute.

First, let’s focus on the start of this chart in 1970. We begin with a base gold price starting at $35 dollars and 12 and a half cents per troy ounce as that is what gold was priced to begin Jan 1970.

The blue line represents compounding gold price data covering moan the eastern world’s gold trading hours. Had you simply bought the LBMA PM gold fix, held it overnight, and then sold on the LBMA AM gold fix the next trading day. We can effectively think of this blue line as the Eastern gold price compounding 50 years.

Just over 2 months ago, in a video, we released on this SD Bullion channel entitled “Yet Another CFTC Position Limit Fail” one which the algorithm content police did not like. We went through a verifiable gold conspiracy fact regarding the very founding of the COMEX gold futures exchange and US Treasury cables intercepted by Wikileaks, which document notes from meetings in London between US Treasury agents and the major London Gold Price fixing parties at the time.

The document proves that the US Treasury was worried about the escalating gold price nearing $200 oz in late 1974 and that the re-legalization of private gold bullion ownership for US Citizens would become a competitor with the then inflating full fiat Federal Reserve note.

The London gold dealers suggested that the COMEX be so highly leveraged to induce high price volatility into the gold futures contract price discovery mechanism, and by doing to it would deter scared investors from saving gold bullion in mass.

In 1975, look right where the L in London is located. You can see that the London AM to PM fix agents did their part by no longer allowing their gold price fixes to allow gold prices to rise, more so to dampen the daily price fix by moving sideways and even downward toward the mania phase of the late 1970s early 1980s gold bullion bull market.

And while the price volatility injecting COMEX likely too helped to essentially cut the price of gold in half from $200 to around $100 an ounce some 18 months later. The gold price then ramped more than 8 fold from $100 to over $800 oz as COMEX lost control of the bulls and derivative betting longs.

China, Russia, Turkey, even India. None of them were sitting in COMEX gold pits, driving that last gold bullion bull market.

It was more so a western derivative driven affair.

Now we are going to move forward in time to focus on the 1980s.

The LBMA came into existence in 1987 established by the Bank of England, the world’s oldest still-running central bank.

By the middle 1980s, we can see here how the blue Eastern drove gold price dislocates from the red western AM fix and begins outperforming the other two during the late 1980s and 1990s gold bear market.

Then the year 2000 and the 21st Century gold bullion bull market comes along and the price divergences between the three lines blow out in epic fashion.

Based on this over 50 yrs of compounding gold price data beginning at just over $35 oz in 1970, the last London AM price fix on the chart was at $1594 oz. The eastern driven 50 price for gold is at $18,572 oz denominated in fiat Federal Reserve notes.

And the London intraday AM buy to PM sell gold fix price data has the price of gold at $2.98 per troy ounce in now early April 2020.

NEVER MISS THE NEWS THAT MATTERS MOST

ZEROHEDGE DIRECTLY TO YOUR INBOX

A final point about how this current gold price discovery mechanism and the gold market does not function well and inevitably has found itself in dislocations and shortages. The same goes for Nymex palladium, Comex silver, and others.

In late 2015, one of the heads of the current shutdown major Swiss gold refineries had the following to say about the seemingly endless Chinese gold kilobar demand just before the fiat Fed note gold price bottomed near $1,050 oz.

Here is what he thought of the building derivative vs physical bullion situation back then.

That clip was provided by Alex Stanczyk’s Physical Gold Fund who by the way only a week ago today had an incredible interview with Jim Rickards regarding many of the topics we cover here.

When you have an hour of time, go check their discussion out here on youtube.

Finally, stay tuned to the end of this video, watch the 2-minute clip on how the then US dollar’s exorbitant print without losing more privilege came to a quickening end.

Then think in terms of the eastern de-dollarized out there.

How might they put an end to this current second iteration, the western LBMA and CMEGroup gold price derivative discovery pool?

That is it for this week, take good care out there. 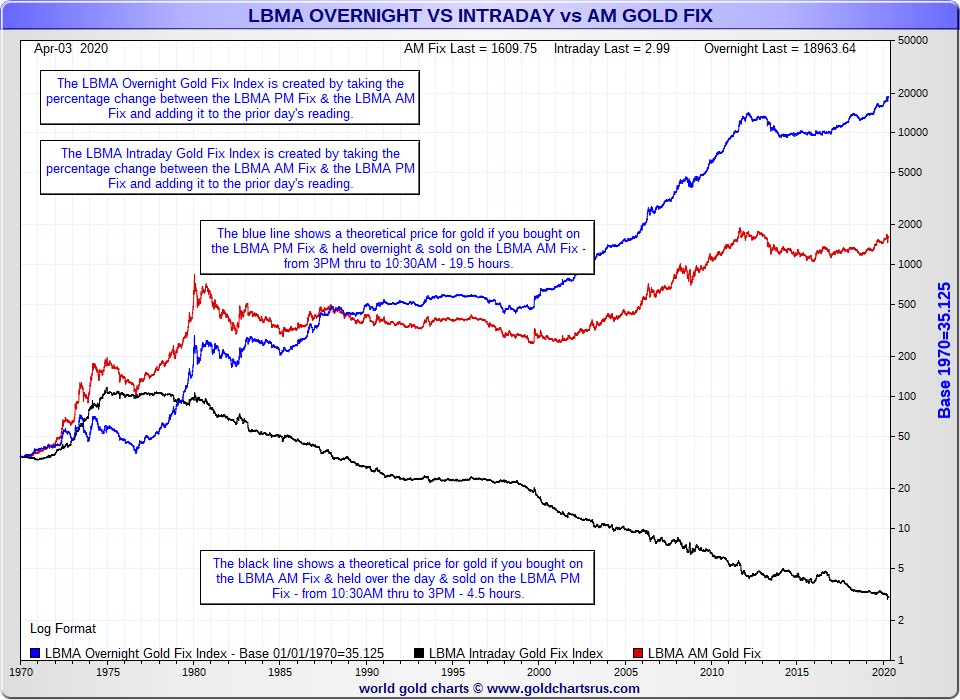